Gerry MacLochlainn, prominent Irish Republican, relates the significance of the 1916 Easter uprising, in Dublin, Ireland, that was a pivotal moment in the struggle of the Irish people for independence from British imperialism.

Speaking in Saklatvala Hall, Southall, at a meeting of the CPGB-ML to celebrate the 99th anniversary of the October Revolution, Gerry says that both the Great October 1917 Russian Revolution – which marks its centenary this year – and the 1916 Easter Uprising in Ireland, were part of the same great world-wide anti-imperialist struggle to free the working peoples of all countries from the pernicious grip of imperialism.

“The October Revolution and the Easter Rising were two of the most seismic events in humanity’s struggle for liberation.” END_OF_DOCUMENT_TOKEN_TO_BE_REPLACED

On Sunday, December 4th, comrades from the Communist Party of Great Britain – Marxist Leninist (CPGB-ML), the Indian Workers’ Association (IWA), and the Socialist Labour Party (SLP) held a meeting to remember the Cuban Revolutionary, Fidel Castro, and his contribution to the betterment of working people in Cuba and around the world.

END_OF_DOCUMENT_TOKEN_TO_BE_REPLACED

Comrade Sayakane Sisouvong, Laos’ Ambassador to the UK, spoke movingly of the electrifying effect that the October Revolution and Soviet Socialism – the first durable workers’ republic – had on the colonised peoples of southeast Asia, including the people of Laos.

END_OF_DOCUMENT_TOKEN_TO_BE_REPLACED

Her full speech is now available to view in this video. Please watch and listen carefully to her words, and share her powerful message widely. You could not find a better antidote to the US election campaign!

Contrary to the mainstream narrative, it was neither Ghandi nor Jinnah who liberated india. Harpal Brar, author of ‘Inquilab Zindabad! India’s liberation struggle’, gives an inspiring and eye-opening introduction to the true history of India’s Liberation from British colonial rule. END_OF_DOCUMENT_TOKEN_TO_BE_REPLACED

Corinne from Red Youth and the CPGB-ML talks at the Februray 2016 annual general meeting of the Stalin Society in London. She asks – who was Stalin?

What role did he play in the formation of the world’s fist socialist country – the USSR – and the building and defence of socialism?

END_OF_DOCUMENT_TOKEN_TO_BE_REPLACED

Comrades from Red Youth yesterday gave a presentation to the Stalin Society, discussing what the vital lessons of the Russian revolution, Stalin’s role in building socialism, and what it means to us today.

The presentation by comrade Corinne is reproduced below.

END_OF_DOCUMENT_TOKEN_TO_BE_REPLACED

As part of the ongoing work this year to mark the 70th anniversary of the victory over fascism, the CPGB-ML and Red Youth organised two well attended party functions in Glasgow and Birmingham at which Party Chairman Harpal Brar gave his presentation on the subject. Both functions were chaired by young cadres of the Party.

Much is written and spoken about WW1 and WW2 – yet it is truly staggering how few people, and particularly how few British workers, really understand the causes and significance of this struggle, in which 60 million workers gave their lives.

The imperialists (Britain, France, USA, Germany, Japan…) fought, and many millions died to preserve and enforce the wage and colonial slavery of the capitalist class. They fought for slaves and booty and nothing more.

END_OF_DOCUMENT_TOKEN_TO_BE_REPLACED 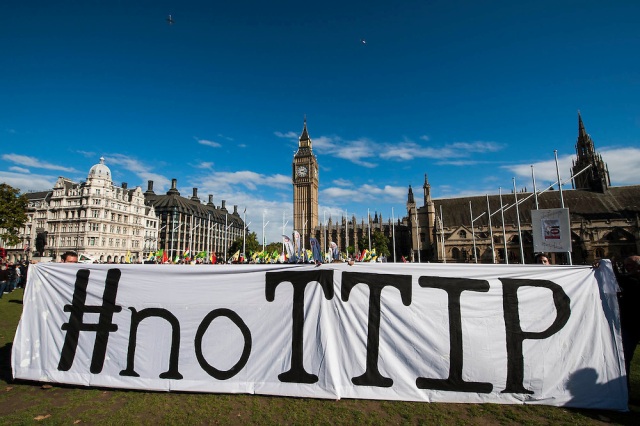 CPGB-ML and Red Youth activists attended and spoke at a demonstration opposing TTIP today at Shepherd’s Bush in West London (see video below).

TTIP is the latest in the legacy of cuts and privatisation ushered in by successive imperialist governments, and has been rearing it’s ugly head with increasing frequency in the media recently – but not without opposition, despite the best attempts of our governments and media to sanitise it, and brush its anti-social effects under the carpet.

END_OF_DOCUMENT_TOKEN_TO_BE_REPLACED

On 18th September 2014 the people of Scotland will vote in a referendum to decide whether they will remain part of the Great British Nation.

It is undeniable that the Scots have a Scottish Culture and national consciousness – but it is our contention that the poeple of Scotland developed all the characteristics of nationhood in the late 18th and early 19th century – and precisely at that time elected to throw their lot in with the people of England and Wales to join in the creation of a British Nation.

The Scottish and English – British – ruling capitalist class cooperated fully in their quest for industrial development, conquering colonial markets and creaeting a fully fledged empire, characterised by the systematic export of capital, the exploitation and domination of millions of clonial peoples.

Morever the British working class came together, including the poeple of the highlands, islands and lowlands of Scotland, to either make their fortune in assisting the British project, or to cooperate in their quest for chartism, and for either reform of the exploitative capitalist syustem, or its revolutionary overthrow.

Adherants of left nationalism make all sorts of claims regarding the prospect of an independent Scotland – that it will bring world equality (at least one step nearer), that it will give rise to a fair and just (albeit monarchist, capitalist and imperialsit!) society; that it will rid scotalnd of nuclear weapons, or aggressive armies (although Scotland will remain part of the most aggressive warmongering imperial alliance ever assembled – namely NATO -, and will seek to become a member of the EU imperialist club), etc, etc.

Rest assured, that the British monopoly capitalist class are not offering the dismemberment of their exploitative machine, or marauding armies. The State will not be broken by an independant Scotland as envisaged by the SNP, SSP, or any other member of this alliance.

These parties can win at best a little more personal influence and power. They will not bring the British people – be they English, Welsh or Scotch – one step closer to meaningful freedom. Rather they can achieve only the sowing of greater discord, and disorganisation, among British workers, with the diversion and false poanacea of ‘independence’.

The truth is that the only fight that can bring equality and justice to the working beople of Britain, is the fight against capitalism and for socialism – that must place decisoin-making power in the hands of workers.

What is urgently required is not more divisive nationalism, but the wide adoption of an internationalist outlook and approach to our problems: Workers are better together; stronger united. https://www.youtube.com/watch?v=XD687At2NvU

In this excellent presentation, Harpal Brar, speaking in 2012 in (the semi-autonomous republic of) Southall, explains “what is a nation?”, and goes on to adderss the specific question “Is Scotland a nation”.

Excellent introductory and explanatory fotage – Don’t vote before you watch!