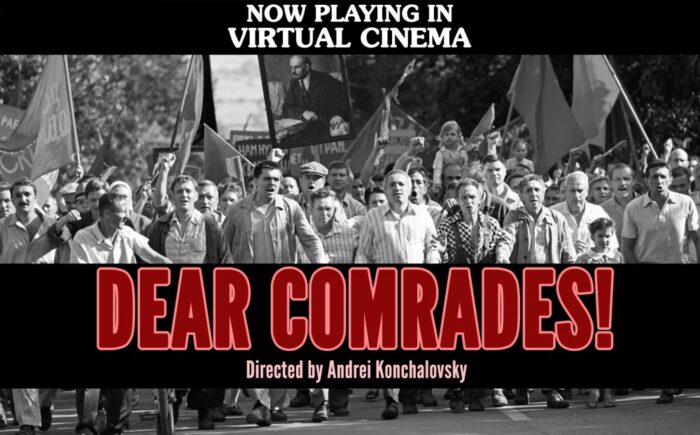 Expose this foul slander of the Red Army

The film’s director, Andrei Konchalovsky, is praised for this “disturbingly handsome feature” which “presents its bleakly crisp black-and-white images in a retro 4×3 frame”, whilst the cinematographer, Andrey Naydenov, is congratulated on his achievement of “an utterly convincing air of mounting chaos, brilliantly captured on multiple cameras”. But all this obsession with aesthetic form is merely to sugar  the pill of yet more bitter anti-communism. It is like complimenting Leni Riefenstal on her artful camera angles in “Triumph of the Will”.

The historical event which forms the backdrop to the film’s melodrama is an industrial disturbance taking place in Novocherkassk in 1962. The facts, such as they are, seem to be that some workers went on strike at the Novocherkassk Electromotive Building Factory (NEBF), apparently unhappy over an increase of the factory’s production quotas coming on top of a hike in the dairy and meat prices. This gave rise to protests, which concluded with security forces restoring order, with some loss of life.

Beyond this bald narrative, the facts grow sufficiently misty to allow free play to the lurid imagination of later generations of bourgeois scribblers fueled by a deep hatred of communism. In 1992, with the counter revolution firmly in the driving seat, a politically loaded investigation of the 1962 events was led by one Yuri Bagrayev. Kermode notes approvingly that Bagrayev also acted as a consultant on the script.

There are glaring disparities in the available testimonies. According to one account, 26 workers were killed by troops. This does not satisfy Solzhenitsyn’s appetite for deception, who declared in The Gulag Archipelago that “information from a variety of sources [!] is more or less [!] unanimous that some seventy or eighty people were killed”. Wikipedia goes on to cite various sources in Russian to suggest further reprisals against participants in the protests.

In the absence of any reliably objective account of these tragic events, the best thing to concentrate on is the central allegation, which is that the Red Army conducted a cold-blooded massacre of unarmed workers. This filthy slander of the Red Army, whose titanic sacrifices and achievements in the struggle to defend the socialist homeland and free the world from fascism had won them the love and gratitude of the toiling masses, does not stand up to even the briefest scrutiny.

The quickest way to deal with the false notion that what happened in June 1962 was a brutal military assault on a peaceful workers’ demonstration is to look at the account given on the viciously anti-communist website Meduza, no friend of the Soviet Union, posted on 23 January 2017. (Meduza, 23 January 2017)

Meduza’s hostility to the Soviet Union is so poisonous that it cannot conceal its excitement as the protests became more violent. With bated breath it relates how several hundred “activists” tied up the factory guard and triggered the factory whistle. Further, “ The workers pulled down a fence and covered the train tracks with wood boards about 100 yards from the factory, blocking the railway that led to the southern USSR. When a passenger-train headed from Saratov to Rostov stopped at the barricade, the workers climbed into the front cabin and started tugging on the train’s whistle. … One of the factory’s engineers demanded that the train be allowed through, but the crowd grabbed him, and someone even suggested throwing him into the locomotive’s furnace.”

Meduza cites the words of a machinist who said that he “got worried when I heard the calls to seize government buildings, I remembered what happened in Hungary and Georgia, where attempts to seize government buildings brought about serious consequences”. The machinist is presumably referencing the events in Hungary in 1956, where what the West dressed up as a democratic protest movement rapidly degenerated into a full-blown fascist counter-revolution, with communists strung up from the lamp posts – doubtless an outcome which would suit Meduza down to the ground. Order was only restored with the assistance of Soviet tanks.

Meduza goes on to report that about 7,000 had gathered in a square outside the factory. Then, “police officers armed with megaphones ordered the protesters to disperse. In response, the demonstrators started throwing sticks and stones. Speaking from the factory balcony, Rostov Communist Party regional committee First Secretary Alexander Basovtried to calm down the crowd, but the rocks and even a bottle of kefir were soon flying in his direction, too. Basov went to hide in the factory’s administrative office, where he was soon trapped by protesters, who also refused to allow the police into the building. The authorities only managed to extract Basov by the evening, when several paratroopers broke through to the factory.

Meduza continues, “In the morning, another crowd assembled in the square, with everyone discussing the events of the day before and the overnight appearance of the military. Almost immediately, the demonstrators broke through the line of soldiers defending the railway and again blocked the tracks, stopping a train headed to Baku from Moscow.”

The next target was a building housing the city committee. “The building was being guarded by unarmed soldiers and neighborhood watch volunteers, but they were unable to hold off the demonstrators. Two guards were even beat up, and a third was injured by glass from a shattered door. Protesters caught an employee from the prosecutor’s office who turned up nearby and tried to throw him from the balcony. Several people tried to grab one soldier’s automatic weapon (which had no clip). In the scuffle, they hit another soldier in the head and knocked him out. That man claimed he saw two other soldiers lying unconscious around him, when he came to. But he still had his gun.”

Meduza next relates that “about 300 demonstrators went to the city police department, which was located in the same place as the city’s KGB branch, just a few hundred yards from the square. When the military refused to let the crowd inside the KGB building, a handful of protesters tried to climb the fence. In response, the soldiers fired off several warning shots.”

Ignoring the warning shots, says Meduza, about fifty people set about “breaking down the doors and rushing inside. The demonstrators started crowding the soldiers into the stairwell, and two were cut off from the main group. Workers seized one of their automatic weapons and then a protester pointed it at the soldiers, leading one of the soldiers to fire a warning shot into the air and demand that the protestor drop the weapon. When the demonstrators tried to pull back the bolt lever, the soldiers shot him.

Going by Meduza’s account, it was at this point that warning shots were heard and ignored, followed by the alleged “massacre”.

At this stage of the narrative, all clarity is lost in a welter of contesting claims which we are not able to weigh independently, derived from unverifiable personal accounts. What is clearly heard from the vehemently anti-communist source, Meduza, is that prior to the restoration of order, the protest involved all manner of violence, up to and including beating up soldiers and threatening to shoot them.

We invite Mark Kermode to name any state in the world that would not take the firmest steps against any threat to its right to rule. The only difference is that the state in question happened to be upholding the class interests of the masses against the threat of counter-revolution. It was doing so at the height of the cold war, just months before the Cuban missile crisis and with memories of the US-backed Hungarian counter-revolution still fresh.

The truth is that Kermode does not really give a monkey’s what went on in 1962, just so long as it serves as a handy pre-packaged anti-Soviet backdrop to the morality tale which is played out, with the erstwhile communist stalwart heroine suffering a crisis of conscience when she witnesses the Truth About The Red Menace. As he explains, “Despite the true grit of its historical setting, it’s the personal story of Lyuda’s journey from stoical party hardliner to frantically aggrieved mother that draws the audience in.”

And that surely is what such films and such reviews are all about, finding a way to punch the audience’s buttons and draw them into going along with the reactionary horseshit which they are being sold, albeit tied up in a parcel secured with a pink ribbon.