You may have thought that in 2020 in the midst of a pandemic the practice of western imperialism through all its media outlets of still trying to kill and bury the Soviet Union in general and JV Stalin in particular might have abated, but no.

Articles throughout the year by the New York Times, Reuters and others regarding a mass grave found in the forest at Sandarmokh in the north-western Russian region of Karelia 20 years ago have become their latest ‘proof’ of Stalin’s ruthlessness.

This 20 year-old find is now being regaled by the west as the new ‘Katyn Forest!’ An unusual thing to link it with considering that the Katyn massacre has now been totally debunked in this country by Ella Rule, although in the early 90’s, the capitalist restorationists in Russia had claimed that the Soviets were responsible to appease the west and themselves attack their Soviet predecessors, notably with the willing aid of former president Mikhail Gorbachev.

This time around the same capitalist Russia is checking the facts themselves and their Military Historical Society (MHS) say that along with Soviet citizens the grave contains Soviet soldiers executed by the Finnish Army during World War II.

The west are not happy that the Russians will not play along with their claims this time and have accused capitalist Russia of now covering up Soviet ‘crimes’.

In a further farcical twist, one member, Yuri Dmitriev, of the three people who are supposed to have made the discovery on behalf of the shady anti-state Memorial group has found himself under prosecution on charges of child pornography. He had been acquitted two years prior of similar charges. Our press, of course, claim he is being set up, but if that is the case, why not the other two discoverers who are still free and are both also members of the leadership of Memorial?

When it comes to dissidents, the West deals in double standards 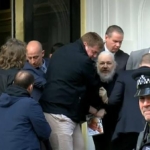 The spy who baked scones
Scroll to top