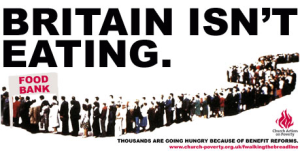 As the crisis of global capitalism deepens, more and more working people in the centres of imperialism, a lot of whom have been living relatively secure (although not necessarily fulfilling) lives, are being pushed down further into real poverty once again. A parliamentary inquiry has just brought to light the extent of the effects of the economic crisis and rising food prices on some of the most poor sections of the working class of Britain. Among other things they found that:

“The rising costs of housing, food and fuel have had an adverse impact on households’ ability to buy and cook meals. Since 2003 food, fuel and housing costs have all increased at a greater rate than earnings, with food (46.4%) and fuel costs (154%) increasing by a significantly greater amount than both earnings (27.9%)and overall inflation (37.7%). Oil and food price spikes will have contributed disproportionately to these increases. This is likely to have had a greater negative impact on living standards for the poorest households.”

Some key stats from the report:

And it is the youth of the country who will come to suffer most, as many are not even provided with a decent present let alone any hope for the future.

Meanwhile the political representatives of the ruling class how out of touch and indifferent they are to the working people of the country. Below are some comments made by Tory politicians (which is of course not to say that the other mainstream parties are any better):

Another thing this inquiry has laid bare is the amount of irrational waste that is produced by the anarchy of capitalist production and its focus on profit rather than need:

“Just 2% of edible surplus food generated by food retailers, manufacturers and suppliers that is fit for consumption, is currently redistributed. 98% of this surplus food is currently turned into compost or energy, or disposed of in landfill.”

Capitalism is proving once again that it is incapable of providing humanity with its basic needs — it merely gives us increasing impoverishment, homelessness and hunger at home, and continued misery, starvation, lack of clean water and shelter for hundreds of millions more around the globe.

To quote from a CPGB-ML leaflet:

It is clear that capitalism has outlived its usefulness. The longer working people allow it to linger on, the more we will suffer.

That is why those who profit from the system are trying to convince the working masses that there is nothing wrong with capitalism; that the only problem is the greed of a few ‘fat cats’. But this is like trying to blame blowflies and maggots for the rotten flesh off which they are feeding. Instead, our attention needs to be focussed on getting rid of the stinking corpse of the capitalist system itself.

Working people must take possession of all means of production now owned by the capitalist class (factories, machines, raw materials etc) in order to start producing goods that directly meet the needs of the people, as opposed to the current system, in which even the most basic necessities of life are only produced or distributed if there is a profit to be made.

The capitalist state has been perfected as a machine to prevent us challenging capitalist relations of production and it must be smashed. In its place we need to build a workers’ state, whose main jobs will be to plan production rationally and to stop the old exploiters returning to continue their reign of misery and war. This is the only way out of the mists of darkness.

The financial crisis is not of our making; our work can and will create sufficient wealth for everybody to be able to live well. If capitalism will not produce or distribute because there’s no profit to be made, then the working class must step into the breach to take over production for itself.

By spreading understanding about the real nature of the crisis among workers, our party seeks to help empower our class to fulfil its historic mission of killing off capitalism once and for all and building a new socialist society and a bright future for all our children – free of war and free of want.