The British State Murders with impunity: ‘to Protect and Serve’ the Capitalist Class. Not only the Met, but the whole capitalist system is inherently racist and anti-working class, and needs to be dismantled. This is the core truth that underlies Police Injustice.

For much of Britain’s working class, long shackled by unemployment, debt and neglect, and particularly for black and immigrant workers, who are also subject to ingrained institutional persecution, incessant harassment and arbitrary arrest, the oppressive character of the British state requires no elucidation. A host of recent events make it clear that institutional racism remains rampant in Britain today.

This is but one example of many. We could just as easily look at housing, education, income or unemployment statistics.

When we look at our brothers and sisters across the sea, in the USA, we can see just how deep is the irony that that they call themselves “the land of the free and the home of the Brave.” There have been a host  of racist police assaults and murders in the US, from Rodney King to Michael Brown, sparking the Fergusson conflict between the civilian population and a police force so heavily armed they may as well be invading another country.

But the fact that Black and immigrant workers live under a double oppression, is also meant to distract and appease white workers – dividing us from our common interests as workers, and distracting us from the fact that our enemy is the employing class, the capital owning class. White workers are encouraged to see immigration, instead of rich capitalists stealing wealth produced, by the working class as a whole – as ‘the main problem’. We must not be misled by the anti-immigrant, racist ranting of the Daily mail, UKIP, Labour or the Tory party.

Institutions of the British state do not serve the people, and practices such as cover-ups and corruption are part of the very logic of their operations, rather than the results of ‘extraordinary’ actions by a few ‘bad apples’.

The violence of the state must be seen in the context of the economic violence of a system that sabotages and destroys the lives of billions world-wide, and millions in Britain, in order to concentrate the entire wealth of humanity in a tiny number of people’s hands. The 65 richest multi-billionaires today, control as much wealth as HALF THE WORLD’S POPULATION! Between 20 and 25 percent of all 16-24 year olds across the UK are unemployed. As an index of discrimination, it merits attention that a staggering 60 percent of young black men are jobless. As a result of endemic unemployment and under- employment, declining and often derisory wages, 3.6 million British children are growing up in poverty (between a quarter and a third of all children in the UK), and that this figure is set to rise. A recent report indicates that 1,000,000 children go hungry in Britain every day. How long will British workers accept this meekly? Our ruling class are already preparing for the violence they think will arise from this unjust and appalling inequality.

They know that they would not stand for it – so why should we?

STEPHEN LAWRENCE – CORRUPTION AND RACISM IN THE MET

On 18 March 2014, it was revealed that the Metropolitan Police in 2003 destroyed a vast cache of documents connected to an ongoing corruption investigation, including documents relating to a detective involved in the investigation of the murder of Stephen Lawrence in 1993.

In an interview in the Guardian on 28 January 2012, Doreen Lawrence underlined that the police failed to find her son’s murderers, but stopped his brother 20 times as a criminal suspect! She herself was stopped a year after the murder, ‘suspected of driving a stolen car’.

This disclosure came just weeks after a coroner’s inquest ruled that the murder of Mark Duggan in August 2011 was ‘lawful’, despite the jury agreeing that Duggan was unarmed at the time. The two-and-a-half years following his murder have not only seen the usual attempts at cover-up and the giving of false evidence by the officers involved, but also a sustained media smear campaign against Mr Duggan and his family. 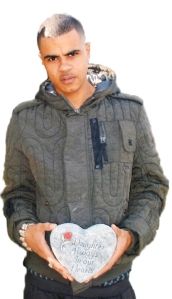 These are just some of the most high-profile cases, which need to be understood in the context of the daily discrimination and harassment suffered by black and Asian communities at the hands of the British police.

One of the most striking examples of this is the disproportionate use of ‘stop and search’ powers. These attacks on the black community have been ongoing since the notorious ‘sus’ (Suspicion) powers police used to target them since the 1970s.

Despite black people being around half as likely to be using drugs as other members of the public, in 2009-10 black people in England and Wales were more than six times more likely to be stopped and searched for drugs possession.

In addition to this, they are treated far more harshly by the ‘justice’ system after arrest, and are much more likely to be charged for minor offences (as opposed to being merely cautioned).

[See ‘The numbers in black and white: ethnic disparities in the policing and prosecution of drug offences in England and  Wales’, release.org.uk, 2013]

The numbers relating to deaths in custody also display the same disturbing features at a national level. Since 1990, there have been 82 deaths of members of an ethnic minority at the hands of the Metropolitan Police. None of these have to date resulted in a conviction. There have been a further 63 in other forces in the rest of England and Wales.

While many of the black and ethnic-minority deaths have been concentrated in the Metropolitan Police area, the number of deaths in custody generally have been quite consistently higher

for ethnic minorities than for white Britons across the country. (See ‘Datablog: deaths after police contact or in police custody’, guardian.co.uk, 19 July 2012)

Particularly shocking is the number of black people suffering from mental-health problems who have died in police custody, often after having suffered disproportionate violence.

Typical of this racially aggravated assault and police murder are the cases of Roger Sylvester (who died after being ‘restrained’ and asphyxiated by 11 police officers in 1999, while trying to gain access to his own home), and Rocky Bennett  (who expressed his desire to leave voluntary psychiatric treatment, was promptly sectioned, then ‘restrained’ and asphyxiated by a gang of police who effectively murdered him in 1998).

Add this systematic mistreatment and harassment to the wider economic inequalities that exist along ethnic lines and it is quite understandable how even a single incident can spark a drastic reaction; be it the police killings that sparked the Brixton and Broadwater Farm uprisings in 1981 and 1985 or the shooting of Mark Duggan that sparked the youth uprising of 2011.

While all this is deeply troubling, it is unfortunately not surprising. Marxists have long understood that imperialism survives by creating division among workers at home as well as abroad – the partition of the world and exploitation of its masses goes hand in hand with racism and oppression of workers in the centres of imperialism itself

As the old trade-union adage goes, “United we stand, divided we fall”. Or as Karl Marx and Frederick Engels so succinctly put it in the Communist Manifesto, “Workers of the world, unite. You have nothing to lose but your chains!”

The police and Army in Britain have a long history of violence against the organized working class movement, from the Llanelli railway strikers in 1911, to the British General Strike of 1926, the battle of Cable Street in 1936, the Miners Strike of 1984 – 1985, or the more recent anti G11 , Anti-NATO, or student demonstrations against sky-rocketing tuition Fees and the abolition of the EMA, that effectively barred access of the working class to further and higher education.

In December 2011, responding to increased public unrest and clearly anticipating more, Her Majesty’s Inspectorate of Constabulary (HMIC) published a report highlighting the existing legal power of police to shoot ‘arsonists’ if they are deemed to be ‘endangering life’. Whilst lip-service was paid to this tactic being a ‘last resort’, its inclusion within the report, and its subsequent promotion in the bourgeois press, is a thinly- veiled endorsement of the use of live ammunition by police against protestors who are deemed threatening to the British state.

It is a blueprint that authorises the murder of those who deviate from the usual routine and futile avenues of protest, and it must be made clear to workers that, as seductive as the rhetoric on ‘protection of the public’ is, it is a fig-leaf intended to disarm us. 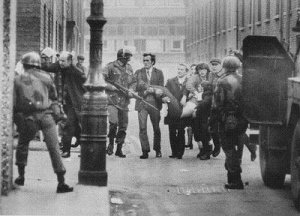 The police were not concerned about the protection of Mark Duggan as they publicly executed him, or of so many of our loved ones who have died at their hands, or languish unjustly in their jails. Claims that he was armed and dangerous have been shown up as false, since the gun it was said he was carrying about his person had no trace of his DNA on it.

The police shot to kill in order to intimidate that section of the local population who are inclined to rebellion, no longer meekly swallowing the bourgeois propaganda and lies that generally serve to hold the working-class population in check.

The police are equally unconcerned about the dozens of people who have died in their custody or in immigration detention camps.

The British state has a long history of violence, oppression, rape and robbery in its colonial possessions, from India and China, to the Americas and Africa. Ireland is its oldest colony, and it still occupies and polices the northern part of that nation.

The British army had no compunction about freely murdering the participants of national liberation struggles in all its colonies over hundreds of years. Just as little were the British military concerned about the protection of the 14 civil rights potestors civilians they murdered in Derry in 1972, or the many others killed and wounded by them over the years of occupation, in Ireland and in Britain. The briefest of inquiry would reveal that their loyal concern lies with the protection of British capitalists’ interests and above all their private property and the perpetuation of the system of class exploitation itself. 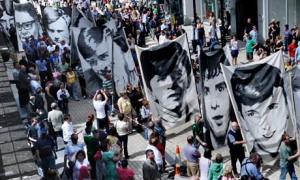 The treatment of Harry Stanley, shot dead by police officers in 1999, for having an ‘Irish accent’ (he was Scottish), and reported carrying a shotgun (in fact a wooden table-leg, which he was carrying home in a plastic bag) is instructive in this regard, as was the police execution of Diarmuid O’Neill in 1996.

As ever, for workers, our only option is to Struggle. But we must realize who are our enemies and who can be won to our cause. British youth need a Marxist-Leninist education that will enable us to adopt leadership positions in our communities, break down the walls of suspicion between workers of different ethnic and religious backgrounds, unite with other communities in common struggle against our oppressors, and advance the struggle against capitalist imperialism.

The CPGB-ML stands in solidarity with all those who are fighting for justice against the tyranny, and murderous oppression of the British State. But also issues a word of caution. The imperialist leopard cannot change his spots. ‘Financial compensation’ is an insult. Police ‘apologies’ are rare, admissions of guilt or reprimand of the officers concerned almost never happen. Why? Because the capitalist’s need the strong arm of the law firmly held to our throats. In the last analysis, the only redress that can be won for the British workers, is the overthrow of the decadent, rotten, corrupt and moribund system of exploitation of one man by another and one nation by another that has landed humanity in this Sorry state of affairs. 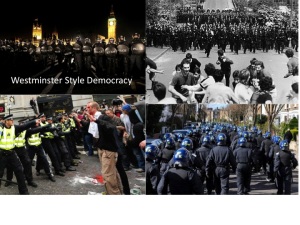 Only the working class in power can solve these issues for themselves. We will guarantee that our society is built upon humane and just lines, that allow the development and flourishing of all individuals within our rich and diverse country and usher in an era that is truly peaceful and prosperous.