NatWest – the bank that likes to say: No! – is trying to gag Russia Today (RT), the fastest growing and most popular independent and objective media source available to the people of Britain.

It cannot be considered a coincidence that this attack coincides with the US-UK ruling class escalation of conflict with Syria, at a time when Russia is the main backer of the democratically elected Syrian government headed by Dr Bashar Al-Assad, and RT is exposing the truth about the Anglo-American dirty war on Syria. Not least because the British state is the major shareholder, and effectively owns and operates RBS (of which NatWest is a subsidiary).

As the infamous propagandists of Nazi Germany noted: “If you tell a lie big enough and keep repeating it, people will eventually come to believe it. The lie can be maintained only for such time as the state can shield the people from the political, economic and/or military consequences of the lie. It thus becomes vitally important for the state to use all of its powers to repress dissent, for the truth is the mortal enemy of the lie, and thus by extension, the truth is the greatest enemy of the State.”

Propaganda War – Control the flow of knowledge and you control the people.

On 17 October 2016 broadcaster Russia Today (known as RT) reported that NatWest Bank (owned by the Royal Bank of Scotland Group, or RBS) had informed them of a decision to cease to offer banking services to RT UK. We condemn this interference and sabotage!

RT is now one of the fastest growing and most popular channels around the world, ranked in the top five news channels in Europe and the US, and in Canada RT is more popular than Sky News. This challenges the suffocating grip that the corporate media have on our news and the establishment are rightly scared.

War and the Big Lie

The wars that have been waged around the world by British and US imperialism are not justifiable wars – they are wars for domination, for profit, and for oil. The growing popularity of RT poses a threat to the continued campaign to paint Russia as a threat to peace.

The BBC and the corporate media are constantly attempting to prepare British people for a military confrontation with Russia, which would be catastrophic for British workers. We must not allow such blatant bias and propaganda to go unchallenged, and we must fight the interference of NatWest in the affairs of Russia Today which operates legally and fairly in Britain.

Speaking about the actions of NatWest Bank, an RT spokeswoman said “this decision is incomprehensible, and without warning. It is, however, not at odds with the countless measures that have been undertaken in Britain and Europe over the last few years to ostracise, shout down, or downright impede the work of RT.”

RT chief Ms Simonyan said the closure included the personal accounts of some senior staff working in Britain, “they have failed to defeat us by simply vilifying us, by picking on our broadcast, so they decided to try the banking flank: ‘Try broadcasting when all your accounts have been closed.’ Yet we will try.”

A spokeswoman for Prime Minister Theresa May said that “it’s a matter for the bank and it’s for them to decide who they offer services to based on their own risk appetite.” This is sheer hypocrisy since Mrs May’s government is ostensibly managing the British state which still owns a significant chunk of RBS! 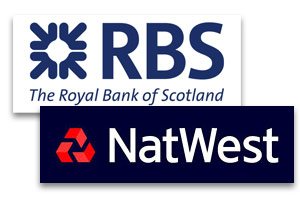 Are you a NatWest customer?

If you are visiting this bank today, please take this opportunity to defend the supposed ‘freedom of the press’ we are meant to have  in this country. Complain about the RBS and NatWest treatment of Russia Today.

RT is constantly being referred to in the British corporate media as ‘Kremlin-backed’, in an attempt to undermine the information that is aired by the channel and claim it is just ‘Russian propaganda’. 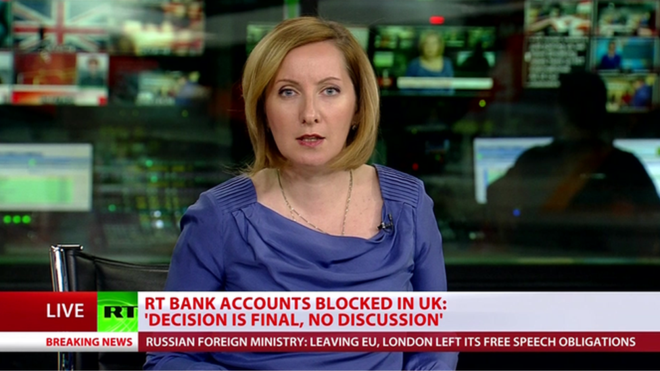 The reality is clear for all to see. Whilst the BBC is a mouthpiece for the British Foreign Office, Russia Today broadcasts news that exposes the lies and misinformation that our so-called unbiased BBC propagates.

The BBC lies and it knows it lies. There is no accident or confusion about this, just a concerted attempt to create a propaganda picture that fits with the imperialist agenda – whether that be of destroying independent

Syria, supporting fascist thugs in Ukraine, or destroying the gains of secular Libya, which has now been reduced to rubble and is overrun by British-backed jihadists. This propaganda campaign on television and radio is what the military refer to as ‘psyops’ – psychological operations – and it’s a crucial and criminal part of every imperialist war effort.

The constant barrage of lies and war propaganda to which we are daily subjected is a vital cornerstone of the imperialist fortress that keeps our rulers protected and their system in place. The day that workers en masse wake up and realise the extent of the lies that they are being told will be a very dangerous day indeed for the world’s super-exploiters. It is the job of communists and progressives everywhere to do all in their power to bring that day forward by using every opportunity to expose and challenge these psychological operations, and to replace lies with the truth!

Challenge your ideas – challenge their propaganda – seek the truth – serve the people!