We send our congratulations and support to those students of Oxford University who have initiated a campaign to topple Cecil Rhodes Statue, which stands outside Oriel College, half-way up the well known university town’s High Street (pictured).

This seemingly innocuous campaign, echoing those initiated by the South African students of Capetown and Johannesburg, is considered threatening enough by many of our journalists and politicians to call forth a considerable amount of negative coverage in the pages of our daily newspapers and in other mass news media, including, inter alia, the BBC, ITV, Channel 4, the Daily Mail, and the Telegraph. We note that the issue was even thrown in – apparently in passing – to several reactionary diatribes passing themselves off as pious sermons on recent Radio 4 Today programs’ “thought for the day“.

Many of these carefully worded dissuasions rely on apparent truisms – “You can’t wish away the past; real change is about more than symbolism; democracy is about freedom to express all points of view”, etc., to make the point that we shouldn’t pull down Rhodes’ statue, or get rid of such ‘symbols’ of oppression.

But of course, the ‘cultural’ symbol goes along with the reality. And if you walk around Britain, you will find more than a few shameful examples of imperialist exploiters and warmongers glorified in statues and street names. No doubt some will survive for posterity, but the British working class has every reason to tear these symbols down, and not just the symbols of British imperialism, but the reality of its class rule and our oppression. This is the underlying reason that we are told to be tolerant and regard the history of British imperialism with ‘balance’.

All these widely circulated reports, editorials, and denunciations, of course, constitute totally independent and ‘objective’ commentary, you understand. None of this is ‘bourgeois propaganda’. Oh no!

Who was Cecil Rhodes?

Many of you will have heard of Cecil Rhodes – the British colonial ‘adventurer’ who made his fortune in colonial South Africa, notably profiting from gold and diamond mining using colonial slave-labour.

He founded the De Beers corporation – which remains a monopoly capitalist force that has outlived political Apartheid, and  continues to play a major role in the domination and oppression of the masses of South Africa today – with all its ongoing poverty, oppression and division that continues to reflect the legacy of colonialism and apartheid.

Rhodes was a true ‘father figure’ of British Imperialism, and famously advocated an expansion of the British Empire, in order to use the proceeds of super-exploitation of the colonies to mitigate the miserable standard of living of the British domestic proletariat, and thus avert revolution. British Workers, we should recall, were seething with revolutionary resentment against their conditions of crushing exploitation and poverty at the beginning of the 20th century.

Rhodes set out with his own colonial expeditionary force to conquer Matabeleland and there founded – upon the subjugation and forced labour of the conquered Indebe and Shona poeples – his very own colonial fifedom, named modestly in his own honour: “Rhodesia”.

Rhodes the Racist – for profit

Unsurprisingly, Rhodes was a racist to the core, justifying his personal looting, merauding, robbery, and murderous conquest with the usual colonialist platitudes. Rhodes was free with his opinion of Black Africans, and other enslaved ‘colonial’ peoples:

“For the Rhodesian it is absurd to take the untutored savage, accustomed as he is from time immemorial to superstitious and primitive ideas of law and justice, and suddenly try to govern him by the same code of laws that govern a people with many centuries of experience and enlightenment”.

Like all colonial administrations, Rhodesia operated a strict code of oppression along racial as well as class lines. Rhodesia remained an apartheid state right up until its overthrow by the national liberation struggle led by ZANU, ZANLA, and Robert Mugabe, who should rightly be considered as Zimbabwe’s founding father, much as Mandela is regarded in South Africa. An excellent article on the history of the anti-colonial struggle in Rhodesia – now Zimbabwe – can be read in Lalkar here.

Rhodes (imperialism) and the split in Socialism:

Rhodes was forthright in declaring his desire to bribe the working-class movement in order to turn it away from Socialism – and his view on the necessity of creating an ‘aristocracy of labour’ (a term coined by Engels) to avert revolution has been the objective basis of the Social Democratic political movement that the Labour Party continues to represent today, as supported by revisionist communist groups and trotskyites alike. That is why the latter fail to recognise Lenin’s key teachings on imperialism. 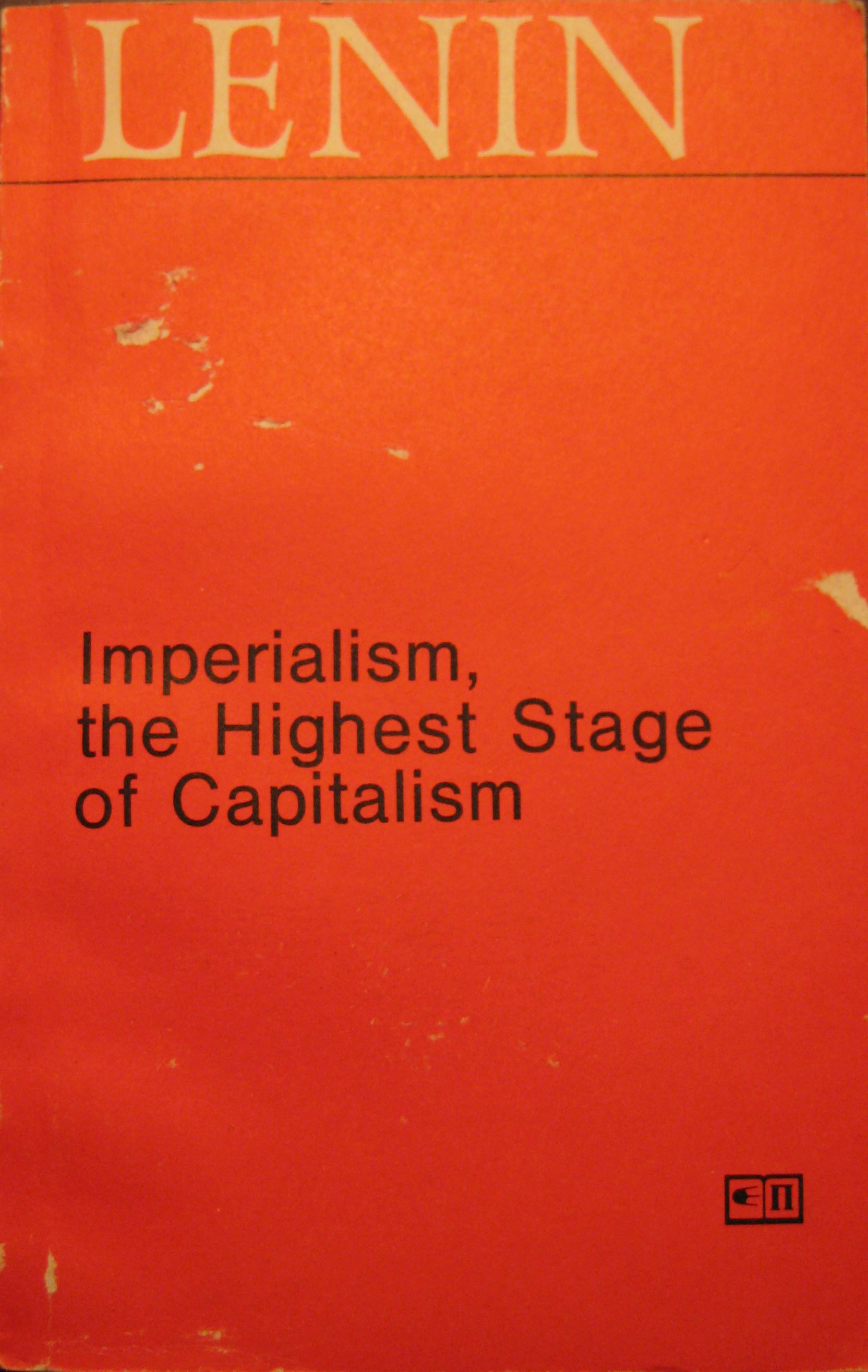 The following quotation of Cecil Rhodes, for example, is cited in chapter 6 of Lenin’s book “imperialism the highest stage of capitalism.” which should be read and understood by any thinking worker who seeks real and meaningful change in our exploitative society.

“I was in the East End of London (a working-class quarter) yesterday and attended a meeting of the unemployed. I listened to the wild speeches, which were just a cry for ‘bread! bread!’ and on my way home I pondered over the scene and I became more than ever convinced of the importance of imperialism…. My cherished idea is a solution for the social problem, i.e., in order to save the 40,000,000 inhabitants of the United Kingdom from a bloody civil war, we colonial statesmen must acquire new lands to settle the surplus population, to provide new markets for the goods produced in the factories and mines. The Empire, as I have always said, is a bread and butter question. If you want to avoid civil war, you must become imperialists.”

The reason British imperialists still care about this seemingly ‘historic’ and apparently settled question is not just the size of the bursary donated by the Racist Rhodes, which continues to finance the US-UK scholarship program.

The real question here is one of the ongoing exploitative interests of imperialism, and to a large extent the fear of the British and South African Bourgeoisie, that the South African black population will seek to settle the as yet unresolved colonial question (famously laid down in the ANC’s Freedom Charter) of the iniquitous distribution of land, mineral and industrial wealth – stolen from them at gunpoint, and accumulated by their slave labour (as all wealth has been looted from the exploited masses of all countries) and still conspicuously concentrated in the hands of a tiny minority of overwhelmingly white farmers industrialists and bankers.

While demonised in the imperialist US and British Media (including our ‘objective’ BBC) the revolutionary redistribution of land and mineral resources effected in Zimbabwe under the heroic leadership of ZANU and Robert Mugabe inspires celebration among the South African masses.

We would encourage our readership and all comrades to learn more about the legacy of Rhodes, and the liberation struggle in Rhodesia – Zimbabwe. In particular we recommend: Chimurenga! edited by Harpal Brar. This and other titles can be purchased from Mutiny Books, or by contacting the CPGB-ML bookshop directly.

For our part, we welcome the long overdue toppling of Rhodes’ statue at Cape Town University in South Africa, and the Oxford campaign that has been inspired by the articulate anti-racist, anti-colonialist and anti-imperialist rhetoric of the South African students. 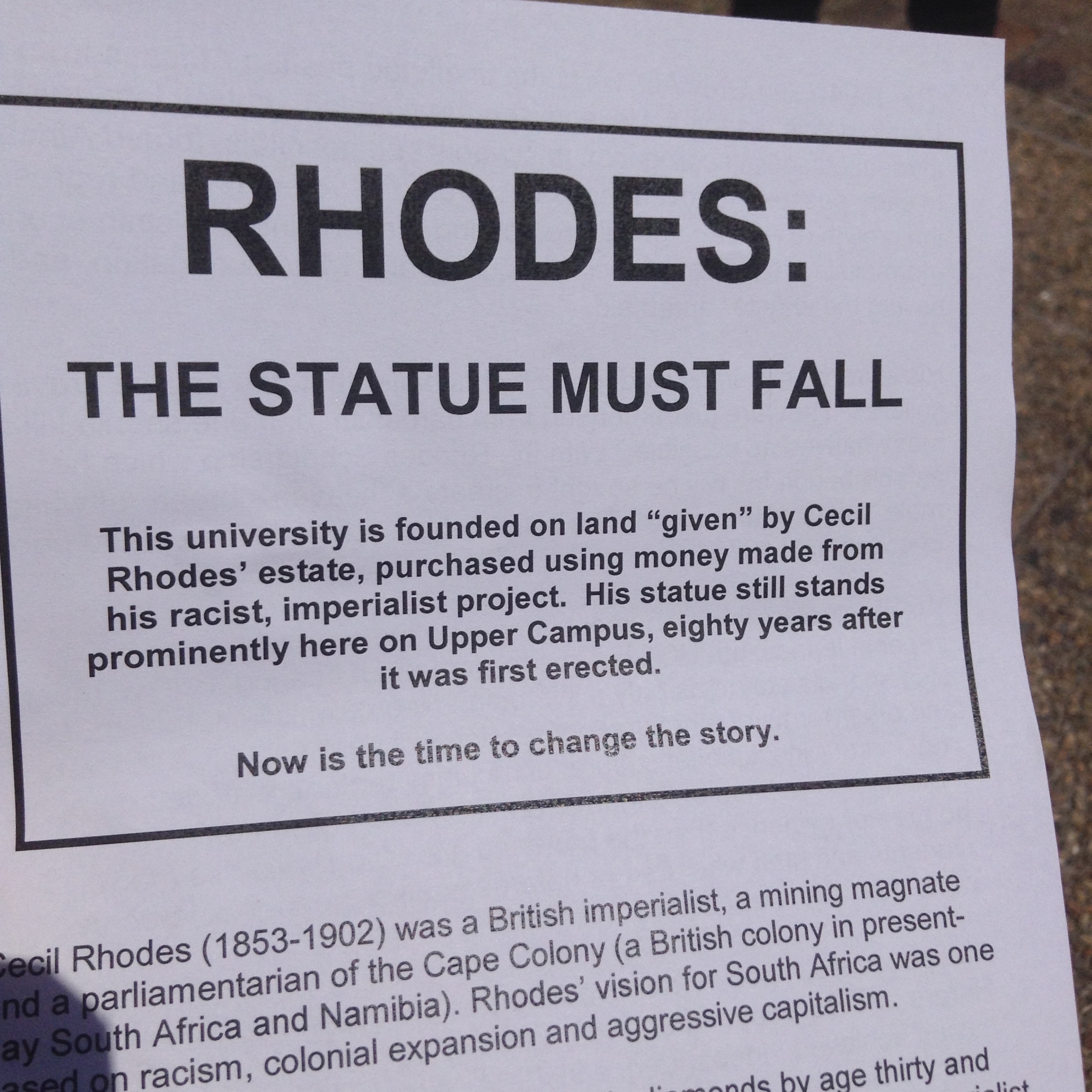 Our bourgeoisie, like that of South Africa, is keen to repaint the bloody history of colonialism in pretty colours, in order to justify and embellish their current exploitative activities and the legacy of class society. Hence the careful painting of Rhodes as a ‘Great man of History’.

Working people cannot afford to look upon our exploiters in this detached, forgiving and laissez-faire way. For our struggle is far from over, and we must set our sights firmly on toppling exploitative capitalism, in its highest, most rabid and bloodthirsty, monopoly phase. Rhodes is indestinguishable from the edifice of British imperailism and we welcome this campaign to remove his pernicious ‘cultural’ influence.