Sunday 09 October saw the 80th anniversary march and rally of the Battle of Cable Street, proudly attended by the CPGB-ML, Red Youth, and a multitude of socialist parties, trade unions, anti-fascists, and anarchists. The event saw thousands of working class activists, young and old, some there to remember, and some to discover the lessons of the past that must inform our actions today and in future.

On 4 October 1936 a mass mobilisation of some 20,000 people in the East End of London, primarily organised by the Communist Party of Great Britain (CPGB) and the Independent Labour Party (ILP), forced out the blackshirts of Sir Oswald Mosley’s British Union of Fascists (BUF). 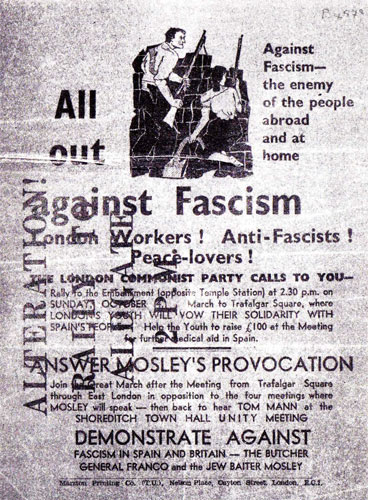 It was a great and highly organised fight, with strategic placements, barricades and worked-out rushes at the police, who were standing between the blackshirts and the angry, politically motivated East End working class.

The organisation of the anti-fascists was hardly surprising. Not only because they outnumbered the 3,000 or so fascists and 6,000 or so police, but also because many of the men over the age of 36 had fought in the trenches during the first world war, and therefore understood the military basics of attack and defence. Energy and commitment are great, but energy, commitment, experience and expertise are even better.

Anyone who wants to read more about the sheer verve and vigour of the day should get hold of a copy of the communist Phil Piratin’s book, Our Flag Stays Red, and there are other tremendous communist and working-class eye witness and participant accounts as well. All of them reflect the sort of writing that brings to mind William Wordsworth’s famous lines from his poem French Revolution (written in 1805, before he turned against the idea of revolution):

Bliss was it in that dawn to be alive,But to be young was very heaven.

But though the Battle of Cable Street was a very visible demonstration of communist power and influence in the East End, and the euphoria around it at the time – and the continuing interest today – is completely understandable; and while the workers’ victory in the Battle of Cable Street should most certainly be celebrated, it also has to be understood that it was a victorious battle, not a victorious war, and not all of its repercussions were favourable to the communist movement.

After the blackshirts were forced off the East End’s streets, they continued to hold meetings that attracted large audiences in Stepney, Shoreditch, Bethnal Green and Stoke Newington. Special Branch reported that the membership of the British Union of Fascists actually increased by some 2,000 during this period. (See Martin Pugh, Hurrah for the Blackshirts: Fascists and Fascism between the Wars, 2005)

There can be little doubt that if the Red Army had not smashed the German Nazis, the BUF would almost certainly have reappeared in strength after the war. As it was, the union was rebranded in 1948 as Mosley’s new Union Movement, which demanded a United Europe with no immigration – a political potage that attracted practically no attention from a post-war population interested in housing, the new NHS, and nationalisation.

In 1936 it was not necessary to get police or local authority permission before staging a march or demonstration, but, on 2 October, two days before the BUF march, a delegation from the Jewish People’s Council (against fascism and antisemitism) went to home secretary Sir John Simon with a petition containing 100,000 signatures asking for the march to be banned, as it would inevitably cause a ‘breach of the peace’.

The Jewish People’s Council (JPC) was a short-lived working-class organisation, not be confused with the elite British Board of Deputies (BBD), but while the BBD position of avoiding direct confrontation with the fascists has been rightly criticised, it was not inactive. (See Daniel Tilles, British Fascism and anti-Semitism and Jewish responses, 2014)

On 2 October, a senior civil servant spoke to the JPC delegation. Sir John himself was away in Scotland, delivering a speech that equated communism with fascism: “Communism and fascism … are both foreign products. However much they denounce each other, the communists and fascists have one aim in common: to get rid of democratic self-government in favour of a dictatorship.”

The cost of policing fascist marches had actually become an issue in several towns that summer, yet Sir John had left instructions for any delegation demanding a ban on the march to be ignored and for the BUF march in the East End to go ahead. Perhaps Sir John did not care if fascists and communists battered each other to pieces, but he also had another agenda: letting the march go ahead and a battle take place between fascists and anti-fascists would allow the government to introduce public order legislation, which would restrict the free speech and right to demonstrate of all workers – communists as much as (and more than) fascists.

The moment the Battle of Cable Street was over, if not before, Sir John had the arch anti-communist general secretary of the Trade Union Congress (TUC), Sir Walter Citrine, on side. Citrine had been general secretary at the time of the 1926 general strike, and in 1927 had written Democracy or Disruption – An Examination of Communist Influences in the Trade Unions.

Minister Simon also gained the crucial support of Herbert Morrison, then head of the London County Council (LCC). Later, as home secretary during the early wartime coalition government, Morrison would ban the Daily Worker, the organ of the Communist Party of Great Britain. Morrison’s anti-communism was as visceral as Citrine’s, and, with no effective opposition from within the Labour movement, the Public Order Act 1936 had no problem passing both houses. It received royal assent on 18 December 1936.

Most historical attention has been given to the banning of political uniforms by the act, but also important was the prohibition of organised training in military techniques and the imposition for the first time in British history of the need to get prior permission to march and demonstrate. Before this time, demonstrations could only be legally stopped if and when they had become tumultuous and violent; and only when the Riot Act had been read and people given time to disperse. (That was the theory, anyway. Clearly, as at Peterloo in 1819 and Coldbath Fields in 1833, theory did not always translate into practice.)

Even so, the new legal requirement for prior permission to assemble and demonstrate was an enormous abrogation of traditional civil liberties, as were the new restrictions on free speech (all in the name of ‘keeping the peace’, of course). As might have been expected, and was no doubt intended, the Public Order Act 1936 remained on the statute books, to be used consistently against Irish republicans, trade unionists and others on the left – including against flying pickets during the miners’ great strike of 1984-5 – and rarely, if ever, against fascists or the far right.

The danger of a backlash cannot be allowed to lead to inaction where action is desperately needed to defend the working class, however. If the anti-fascists had taken the advice of the British Board of Deputies (and the Quakers) and simply stayed indoors while the fascists marched, these ultra-reactionary elements would have been considerably emboldened and encouraged in the organisation of antisemitic harassment of East End workers, and the government would certainly have found some other pretext to introduce its anti-worker legislation.

Moreover, the battle took place in the context of a rising movement, both nationally and internationally, for socialism. Had that battle been successful in Britain, such anti-worker laws would have been cast aside along with the anti-worker government and the whole apparatus of capitalist rule. Laws, after all, are only as strong as the class that enforces them.

In 1936, Stanley Baldwin’s government had been looking for an excuse to introduce and impose this new and draconian public order law, and lost no time in seizing on the opportunity presented by the Battle of Cable Street. This unintended and unwelcome consequence should not for a moment make us regret such an inspiring working-class action, but it does offer a useful lesson: while the capitalist class remains in charge, and the capitalist system remains in place, workers’ victories can only be temporary.

To make our gains secure, we must not only sweep away the vicious minions of the monopoly capitalists who come to harass workers in their own communities, but must extend our efforts to smashing the entire machinery of capitalist dictatorship and control. While we celebrate and take inspiration from the glorious demonstration of working-class power and organisation that led to victory in Cable Street, let us also remember that complete victory is not yet ours.