British newspapers have been screaming (or whatever the written equivalent is) and raging about the very fabric of our society being irredeemably destroyed by 3,000 or so immigrants in a camp known as the jungle in Calais. This is where people who have suffered great losses in terms of friends, family, lifestyle, their homes, even their homelands, and having travelled halfway around the world against bitter odds, have gathered for a final attempt to enter the UK in a bid to regain some of the aspirations and dignity that have been cruelly ripped from them. These people represent most warzones in the world where British and US imperialism have sent their ‘hero’ pilots to rain bombs indiscriminately from miles above ground or have used their proxy armies in the shape of IS, al-Nusra and others to terrorise, torture and murder those who won’t bow before the imperialist parasites. And it is these same imperialist parasites who are driving the planet towards world war three in an effort to solve, if only for a very short time, the contradictions of capitalism that are ravaging balance sheets and proving the unsuitability of their totally outdated system as an economic and political plan for furthering, or even maintaining, the current level of human development.


If anyone should be described as heroes, ie, persons who struggle against great odds and dangers while often putting themselves at risk helping others, etc, to achieve an objective, it is these people in camp Jungle whom we are invited by bourgeois politicians and the Western media alike to despise. The individual stories relating to the imperialist intrusions into their countries, the family and friends lost in those conflicts and the further losses in epic journeys to escape carnage and rebuild lives crossing dangerous seas (see Lalkar, March/April issue 2015; ‘Behind the tragedy of the Libyan boat people‘), travelling through highly hostile lands etc. are heart-rending. But when you realise that facing all the dangers and losses of their journey is still preferable to staying where they were originally, then you begin to understand the enormity of the crimes of imperialism and its supporters and apologists.

To put the hysterical and nonsensical outpourings of most of the British press into some perspective we need only reflect on the simple words of Times columnist David Aaronovitch, himself no ‘leftie’ or bleeding heart, when he just applied a little common sense to the situation and wrote “Britain could accept every single person” of the roughly 3,000 camping out in Calais “and hardly notice it.”

Instead, Britain, to ‘protect its border’, which apparently now extends to the outskirts of Calais, has sent more sniffer dogs and razor wire at huge expense. The Eurotunnel management at one time even dramatically scaled back its overnight freight service to reduce the opportunities for stowaways, a decision which some estimate could have drastic implications for the UK economy, which is claimed to be losing some £250million a day because of the chaos. To either whip up further enmity between British workers and these brave survivors stuck in camp ‘Jungle’ or to use truck drivers as unpaid border guards, in all probability both, the British Government is fining drivers up to £200 if a refugee is found on their vehicle even where it is obviously without the driver’s knowledge leading to drivers constantly searching their loads often while carrying hammers or iron bars to drive any stowaways off. It can only be a matter of time before something really horrible happens. Ten of these refugees from imperialism’s wars have died attempting to get to Britain since June, untold hundreds have received non-lethal injuries falling from vehicles, breaking bones and/or getting serious burns from electrical wires etc.

The situation in the camp is bad, there is one meal a day supplied, charities give some clothing and supplies but many have only what little they have crossed the world with. Diseases are rife and according to one nurse working in the camp from ‘Doctors of the World‘ they are living in horrendous conditions. “Whole families are crammed into small tents with poor access to food and water, leading to all sorts of terrible health problems. These include serious skin problems, gangrene, breathing difficulties, diarrhoea and scabies. Many have shattered bones after falling from trucks, have been slashed by razor wire climbing fences or have been beaten up. Some are extremely vulnerable, including children and pregnant women.”

These people have been described by the Prime Minister, David Cameron, as a “swarm” while his foreign secretary, Phillip Hammond, used no less inflammatory language talking of “marauding” Africans and warning that they could threaten Europe’s living standards and social structures – reminding those who choose to remember of the dehumanising names and descriptions used on European Jews by the leaders of German fascism and their press in the early thirties of the last century. The British press have followed the government lead (and surpassed it in many cases) some even calling for troops to be sent to Calais to confront these victims of imperialist greed and bloody repression.

The Labour politicians have baulked at the language used by the government but the best that most of them can come up with is asking the UN to sort out the few ‘real’ asylum seekers and calling on the French government to deport the rest. The brave tenacious refugees in Calais will be used as a political football by the two main imperialist bourgeois parties in Britain for a while yet but they are unlikely to find any real support among these two parties of imperialist brigandage.

British workers must speak up for their foreign brothers and sisters trapped at a border and treated like animals. We must stand with these refugees and demand that they be given entry. We must demand that British imperialism stop its rapacious wars of spoilage and plunder and when enough understand that imperialism simply cannot do that we must mercilessly destroy the beast that is British imperialism and lay the footings for a socialist Britain. 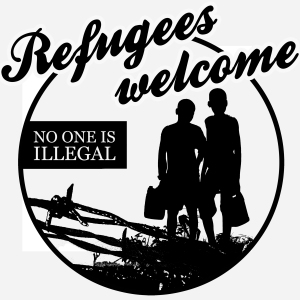 Reproduced from the latest edition of Lalkar