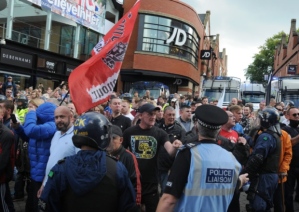 On 19 September the National Front held a demonstration in Wigan against immigration and the recent refugee crisis. Prior to this demonstration their local organiser, Daniel Lewis, called for homosexuals to be gassed in response to the Manchester gay pride festival.

The National Front was met by counter-protesters from parties such as the Communist Party of Great Britain (Marxist-Leninist), Left Unity, SWP, and other organisations were present such as Hope Not Hate.